What if every time an American soldier was killed in Iraq or Afghanistan it was required by law or civility that the U.S. Senator from the soldier’s home state had to call the mother or surviving spouse?

What if for every lost life President Bush was expected to contact the loved ones and respond each time to their questions of why? What if he was called on time and again over 100 times per month to look into their tear filled eyes and answer their pleas, “was it worth it?’ What if instead of hiding the flag draped coffins from view of photographers our President along with our lawmakers were required to be pallbearers?

Would they still show up for work the next day and vote for more weapons, more guns, and more bullets? END_OF_DOCUMENT_TOKEN_TO_BE_REPLACED

Jeremy Scahill, author of New York Times Bestseller Blackwater: The Rise of the World’s Most Powerful Mercenary Army (Nation Books, 2007) will give a presentation and be available for book signing Tuesday, May 15, at 3:00 p.m., at the Unitarian Universalist Fellowship, 158 North Fourth Street.

Blackwater USA, founded in 1996 in North Carolina , is the largest private military base in the world and has recently opened a facility in Jo Daviess County. There, a coalition of local citizens and area peace groups are challenging Blackwater on grounds that they have violated zoning laws. Its attempt to buy land in San Diego County is being challenged by a coalition of environmentalists, local citizens and U.S. Representative Bob Filner. END_OF_DOCUMENT_TOKEN_TO_BE_REPLACED

Victor Wogen is scheduled for an interview on WLBK, 1360 on your AM dial this Friday at 9 a.m. They take listener questions (and feedback?) only via e-mail, so go here for contact info and be sure to share the love come Friday morn.

(If the Wogen scandal is new to you, previous posts here and here can help get you up to speed.)

Get a button like this for about a buck (depending on size) from John Q. DeKalb at Cafe Press. Or you can get one of my homemade “Wogen Resign” badge pins on Saturday (see article immediately below), which look a little less snazzy (OK–a lot less snazzy) than this one but are free.

Citizens for Wogen Resignation will hold a petition-signing event and rally this Saturday, May 5 from 1-5 p.m. on the southwest corner of 4th and Lincoln. It is described as “a peaceful event for those who wish to express their disappointment with Alderman-Elect Wogen’s actions.” Come out and support the 3rd Warders and other townies who want honest representation on the Dekalb City Council. Look for the canopy.

There’s a new link on the right (and slightly south, but probably not for long) that goes to the Citizens for Wogen Resignation website.

The Victor Wogen scandal is not going away.

I’m making “WOGEN RESIGN” pins, which I hope will be seen every day, all over town. If you can help distribute them, e-mail me at yinn422@yahoo.com

I’m an election judge and have been assigned to the NIU Recreation Center for the past two elections.

As a polling place the Rec Center serves four precincts in the 7th Ward, or about 2,000 students. Last fall about 150 ballots were cast. Last Tuesday we got 8. Turnout for the other student ward, the 1st, is comparable. People bemoan the low turnout in this week’s election of 23% of registered voters countywide but this number is skewed by the student participation rate that is a tiny fraction of 1%.

I figure it cost the county about $1500 to put on an election at the Rec Center last Tuesday. It would have cost more if we’d had the preferred number of judges but we worked a little short this time.

Don’t get me wrong. We greeted and guided and appreciated every one of those eight students as much as we would any voter in the county, and the sense of duty and respect for the process works exactly the same for 8 ballots as it does for 800. But I think we’ve got to ask what the obstacles are. Maybe we should start with the hassle of changing one’s registration every time one moves, which students do a lot. Maybe we should move the polling places back into the dorms, where turnout is a little better. Maybe we should look at the laws for candidates, figure out why so many races have candidates running unopposed, like the alderman in the 7th did this time.

Maybe we should eliminate the student wards and see if anyone notices or cares.

An e-mail from a District 428 employee was forwarded to me today.

It is important for the residents of this community to know that the DeKalb School Board is quietly and discreetly trying to outsource their custodial, maintenance, and food service employees. These employees are your neighbors in the community, and they have had or continue to have their children come up through the DeKalb schools. Most importantly, they have attended to and worked tirelessly to ensure your children’s safety and well-being in the schools. Now the DeKalb School Board wants to replace them with outsiders—a company that has no ties to the community that will employ people that are not your neighbors and that have no roots in the community. Do you really want this to happen? Is this where you want your tax monies to go—to fund an outside company and the employees it will bring in instead of being loyal to the community and your neighbors who have worked for the District all these years? I hope not. Call or email a DeKalb School Board member immediately and tell them a resounding “NO” to outsourcing custodial, maintenance, and food services in the District.

These neighbors and others will speak at the next District 428 school board meeting held Thursday, April 19 at 7:00 p.m.–at Huntley Middle School at 7th and Taylor streets instead of the usual location. To e-mail the board your thoughts in the meantime, try board@dist428.org. 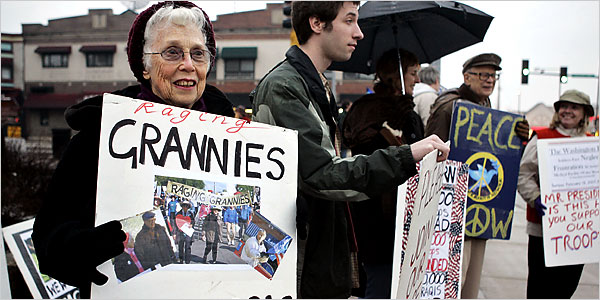 New York Times,“To the Barricades, Oldsters of the Republic:”

IT is a Friday afternoon in this college town on the prairie, and the demonstrators at First Street and Lincoln Highway are raising a political ruckus. Some hoist signs that declare, “Stop the War!” But across the street, people are waving signs with other messages — “Support the Troops” and “Danger: Traitors” — gibing at the antiwar contingent.

Whatever their politics, a big share of the demonstrators on both sides of the street have one thing in common: retirement. Although this is the home of Northern Illinois University, with an enrollment of nearly 25,000, it is the retirees, far more than the students, who are taking to the streets to chant slogans and sing political anthems.

“People in cars drive by and wave at us,” said Cele Meyer, 84, a retired social worker who opposes the war. “Sometimes they use two fingers. Sometimes just one.”

END_OF_DOCUMENT_TOKEN_TO_BE_REPLACED

The stillness of tree lined Skunk Hollow Road in Jo Daviess County Illinois, twenty miles from the beautiful Palisades along the Mississippi River, will soon be shattered by gunfire. Not the gun fire of wild turkey hunters but the gunfire from a new training facility for the most powerful mercenary army in the world, Blackwater USA.

I had a view of Blackwater’s new Illinois facility that is usually reserved for the hawks circling overhead. I stood on-top their climbing/rappelling/shooting tower looking down at the bulldozers busy moving tons of earth to create more shooting ranges.

On eighty acres in this isolated corner of Illinois, one hundred miles from Chicago, Blackwater is creating another large training site. This site will eventually, according to Blackwater North’s vice deputy Eric Davis, compare to their headquarters in North Carolina. They have a full schedule of classes ready to roll beginning April 9th with a pistol shooting course that is already three over capacity. The first three weeks of courses are filled and the others are filling fast. END_OF_DOCUMENT_TOKEN_TO_BE_REPLACED

I have heard a lot of arguments against smoking bans in general. As an X-smoker I can relate to them in some ways. This even gets more accentuated considering I believe a smaller government is a better government. Where does the government get off telling me where and when I can smoke (or not in this case)? It gets off with the idea for the same reason I can’t spray bug spray in folk’s face. Cigarette smoke has been proven toxic, in lots of ways. It should be restricted in public places. Places such as restaurants and bars. I know, I know… as customers, if we can’t stand the smoke, we can leave the premises and find a place that doesn’t allow smoking. Wait! This works for the customers but what about the workers? Jobs don’t come easy for a lot of folks. I’m sure a lot of the people working in the bars and restaurants would love to work in a non-smoking environment but low and behold, the jobs are scarce!

Now I ask you, do the workers in bars and restaurants not deserve the same protection to their health that you do in your workplace? Have you not noticed that you cannot smoke in your office, store or (as so popular here in DeKalb) your warehouse? This is because there are laws protecting your health in those industries. I think it’s time to extend that same protection to everybody.

Now for all of you who say it will kill the industry. I doubt it will. First, folks will still want to eat and drink. Some may go to other cities where they can smoke, but most will probably just take the path of least resistance.

A second line of thought for those bars that insist on allowing smoking. Have you not noticed private clubs are exempt from the law? I remember Addison Tx. (I think that’s the city) had some silly rule about serving alcohol except to club members. So the restaurants simply became clubs and charge a couple of dollars each year for membership dues. I can see this as a possible solution. Become a private club! Charge dues, make folks fill out a simple membership form and away you go. Of course, we still have that nasty worker situation. If they paid their dues (maybe coerced), but they get paid, are they members or workers?

Food for thought. This is a hard issue with many sides and arguments. I’m interested in hearing some more arguments on both sides. Please don’t spew the stats. We all know the poisons that smoke has and all of the diseases it causes. Lets discuss this on the rational of individual rights, majority rule, politics and other fun angles.