DeKalb staff are proposing a one-cent rise in the local sales tax in order to meet next fiscal year’s budget beginning January 1, 2018.

They’ll tell you this is about street improvements, but they didn’t care about that last year or the year before, so I believe anything promised for streets is a sweetener to make the proposal more politically palatable.

What’s really going on is that the city has run out of money for streets AND operations now. They’d like to hire three new patrol officers, but they can’t do it because of the structural budget issue, meaning they’ve hired employees beyond what the growth in revenues can accommodate.

So they want $600,000 of the new sales tax to go into the General Fund. That’s how much they’re short for their current ambitions. But what the city council really should do is tell city manager Anne Marie Gaura to cut some people from the departments that come under the umbrella of administrative services. That’s where the most growth in personnel has happened on Gaura’s watch. 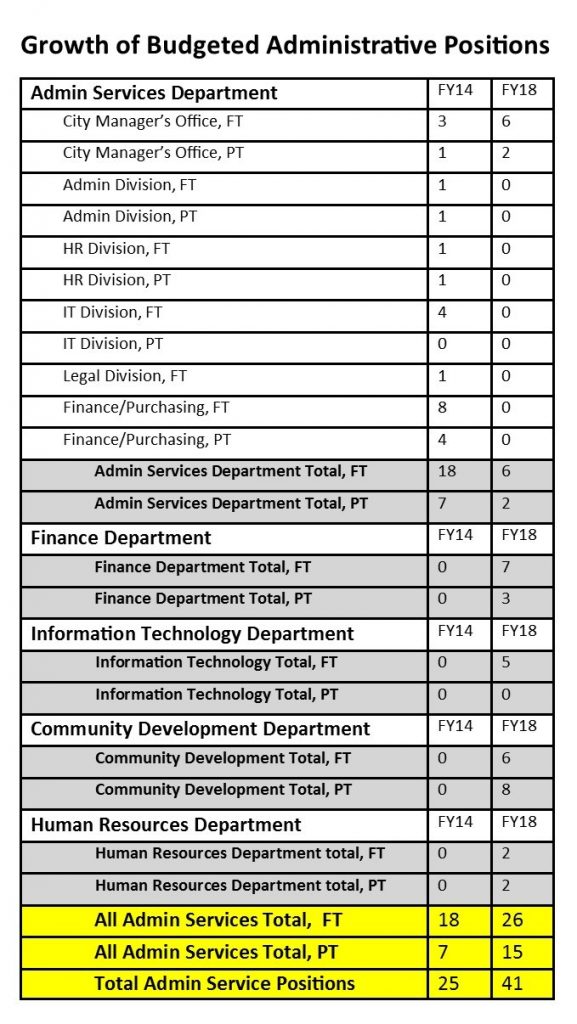 Gaura began working for the city in early 2014. This was smack in the middle of fiscal year 2014, so she didn’t have much to do with that budget. But as you can see, she has since taken divisions that used to be part of one Administrative Services Department (HR, IT, Finance) and built another from a division of Public Works (now called Community Development) to create departments of these divisions.

In other words, Gaura has turned the city’s five departments into nine; and most importantly from a budget perspective, she then grew almost all of these new departments, as you can see in the table above.

We need restructuring, beginning with the city manager’s office.