As indicated in last weekend’s post, the city failed to follow proper procedure in condemning the Stanleys, particularly as concerns notice of code violations.* DeKalb did eventually give the building owners written notices, but not until Monday, April 9, which was the same day as the original deadline for making repairs and avoiding permanent condemnations and evictions.

In the meantime, an inspector posted a placard that should be used only if a building owner fails to make repairs by deadline.

Maybe that’s because the city didn’t want or expect the deadline to be met. 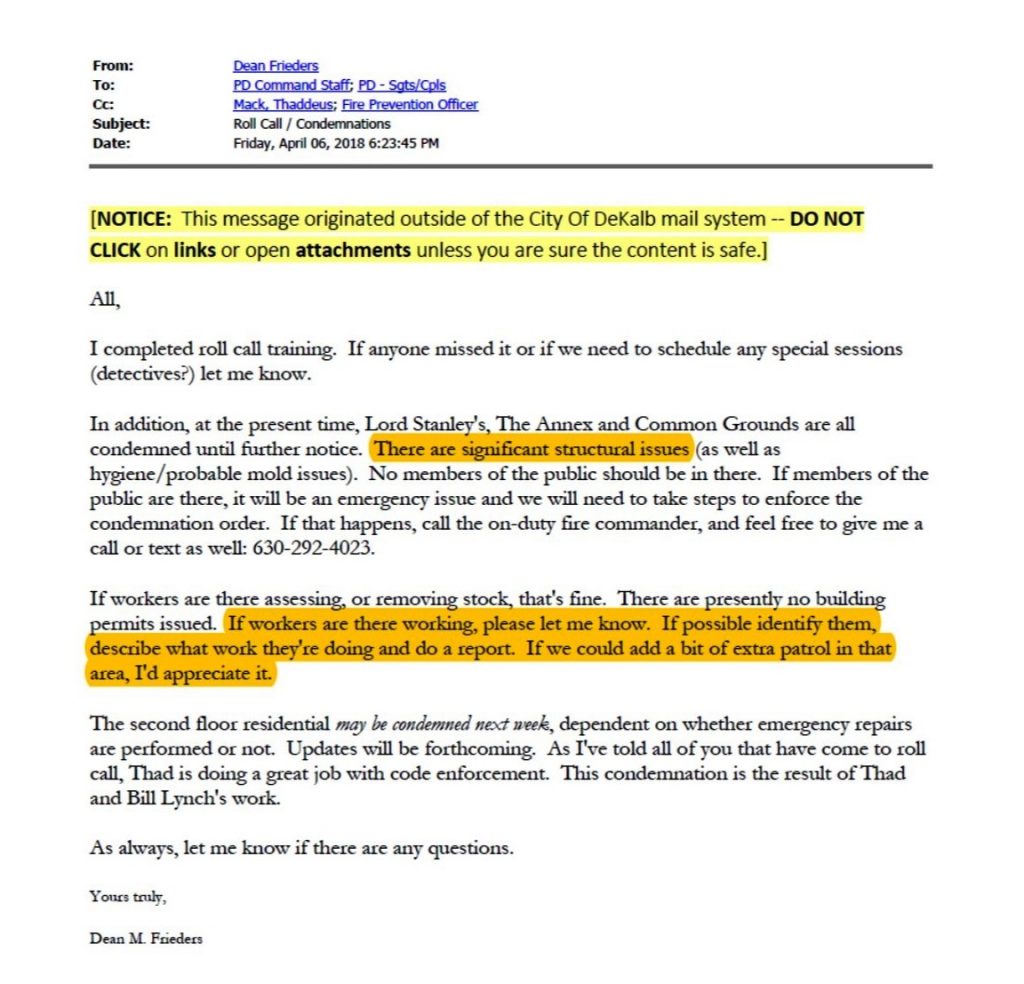 So along with failure to properly notify, and a Friday afternoon condemnation that made it virtually impossible to obtain permits, the city attorney used “significant structural issues” as a basis for asking police to assist in ensuring the building owners could get no work done over the weekend.

Neither the city attorney nor any employee of City of DeKalb has a license to make a determination on “significant structural issues.”

What’s more, had the city posted the proper notice the tenants of the Stanleys’ eight upstairs apartments would have understood that the code problems in the living areas were minor and unlikely to result in evictions. But instead of acknowledging the error, community development director Jo Ellen Charlton sent around an email Sunday night trying to pin the blame on you and me:

Late Sunday afternoon, Alderman Jacobson made me aware that many residents living above Lord Stanley’s and the Annex were under the impression that they would have to leave their residences on Monday if necessary corrections to the minor issues identified upstairs were not corrected by 10:00 AM, and that the building owners were not aware of what the necessary corrections were. I believe these assumptions were made as a result of many factors that transpired since Friday’s condemnation and press release, including many e-mails, blogs and social media posts, many of which I still need to read and decipher.

No, the assumptions about evictions were made because of the red placards on the apartments that said, “Danger – Keep Out” with the “Monday at 10am” part penciled in.

But of course Charlton knows that. The email was part of a shift from sketchy code enforcement into damage control.

1. Be in writing.
2. Include a description of the real estate sufficient for identification.
3. Include a statement of the violation or violations and why the notice is being issued.
4. Include a correction order allowing a reasonable time to make the repairs and improvements required to bring the dwelling unit or structure into compliance with the provisions of this Code.
5. Inform the property owner or owner’s authorized agent of the right to appeal.
6. Include a statement of the right to file a lien in accordance with Section 106.3.