John Kotvan, where ever you are, you should be DeKalb’s hero for the week! Thank you!!

Congrats to our firefighters on reversing the lay offs!

I decided I would keep running the DeKalb Rescue Me Now blog anyway because the Fire and Police Departments seem below a skating rink, a sidewalk from nowhere to nowhere, the brick building mania, spending TIF money like drunken gamblers, and the airport in priorities. When is the skating rink going to save a life? When will the airport have enough land so that the city can stop buying more of it?

I just added a couple of links on CPTED.

2) RESOLUTION AUTHORIZING THE MAYOR OF THE CITY OF DEKALB, ILLINOIS TO EXECUTE A VARIANCE AGREEMENT TO THE COLLECTIVE BARGAINING AGREEMENT WITH THE DEKALB INTERNATIONAL ASSOCIATION OF FIREFIGHTERS, LOCAL 1236, AFL-CIO FOR THE PERIOD OF JULY 1, 2008 THROUGH JUNE 30, 2011.

The City and IAFF Local 1236 have reached a tentative agreement. As part of this agreement, IAFF members agree to an eleven month wage freeze in year one and a six month wage freeze in year two during the remaining two years of the agreement. Members also agree to waive their carrying fee compensation through the term of the contract. In return, the City agrees to offer reinstatement to the three laid off firefighters and to hire an additional recently vacant position. The City also agrees that any firefighter that retires on or before September 5, 2009 shall be eligible for health insurance premiums that were in effect prior to June 29, 2009 but shall be subject to any changes that may occur in the future. Additionally, the City agrees not to lay-off or furlough any Union member through the term of the current contract (June 30, 2011). The terms of this variance agreement will result in approximately $350,000 in savings over the remaining two years of the agreement. Please direct questions about this item to Assistant City Manager Rudy Espiritu.

DeKalb needed to save $500,000 citywide this year. Does the two-year agreement help them meet this milepost? Has anybody done the math? Bueller?

When people say, “I am not making this up,” as the public works director did last night in explaining the lack of competitive bids for waste pickup, I begin to wonder about the occasions when they don’t say it. You?

Mayor Povlsen is still calling comments he disagrees with “misinformation” based on a continued presumption of residents’ ignorance of Tax Increment Financing (TIF). Here is a challenge. I’ll put together a quiz team of eight citizens from last night’s audience to compete with City Council in an exercise to test TIF knowledge. We could call it the TIF Olympics. Let’s hold it on Halloween — I think the results would be pretty scary from the residents’ point of view, if Mr. Baker’s confession is any indication. END_OF_DOCUMENT_TOKEN_TO_BE_REPLACED 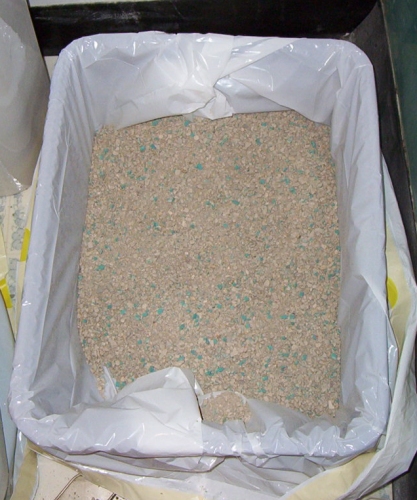 Yes, that is a cat box. Sorry about that but the city started it by deciding that they think they know best on dictating how people take out their trash. Although called a “pilot” program at this point, as described in the Daily Chronicle article, my guess is the city will put this program in place. I do not believe this is a cost-savings plan. Instead, this gives the city the opportunity to make everyone’s trash look the same. DeKalb would look like some sort of Yuppieville, with matching garbage cans. I do not need nor want a trash can. I certainly do not want to be forced into buying two new ones. How will the city buying trash cans for everyone save citizens any money? END_OF_DOCUMENT_TOKEN_TO_BE_REPLACED

From the City of DeKalb press release regarding the fire fighter layoffs, dated July 15:

The City Council has entered into agreements with the FOP and AFSCME unions, along with the City’s management employees, on wage concessions to avoid layoffs. “Unfortunately, we have been unable to come to a similar agreement with IAFF,” Biernacki said. “While IAFF’s latest proposal included some economic concessions, their proposal also included terms that would extend their contract for another 12 months past the current contract expiration date of June 30, 2011. Given the uncertainty over the economy, both now and in the foreseeable future, the Council felt that by extending their contract, the City’s hands would be tied for too long of a time period before which the City could potentially approach IAFF to discuss other economic matters within their contract.” Biernacki also said that the City Council felt that an inappropriate inequity would result between IAFF and the rest of the employee groups if they were to accept IAFF’s proposal.

I get the “hands tied” thing, but there remains the nagging feeling that internal equity is the first priority with this administration. Downtown renewal is the second priority, airport is Number Three, and basic services — especially for the neglected southeast side — clearly lag in fourth place, as you will see in a moment.

With these layoffs, the City’s fire and EMS services are not expected to materially change at this time. “We will still perform and deliver high quality and professional emergency services to DeKalb and its residents,” Fire Chief Bruce Harrison said. “Our highly trained and professional staff will always be there in time of need and will not allow the safety of our community to be compromised.” Harrison said that adjustments in Fire Department operations will be made to ensure the service delivery the community has come to expect. He also said closures of any of the City’s three fire stations are not being considered at this time. [emphasis added.]

I’ve been by Station No. 2 (South 7th Street) several times over the past couple days and there is no longer a fire engine housed there, only an ambulance. According to the new blog Save DeKalb Firefighters.com, the reduction was effective August 1.

In my book, that’s a material change in services for the worse.

Where’s the press release about that?

Recommended video from a firefighters from another city familiar with DeKalb’s decisions.

Here is the same video edited with the firefighter screaming for help with the victim, and evidence that the two-in/two-out OSHA mandated policy is necessary.

I think the firefighter layoffs are important enough to become a blog:

From the diary on my campaign site:

Getting tired of the whole “we have a balanced budget” and “we have a surplus” talk…Tell you what -– let’s go with that. Let’s just say we believe the surplus is real, on condition that if it disappears right after the election, the city manager is held responsible and dismissed.

Nobody’s been held responsible or dismissed yet, except for 3 firefighters.