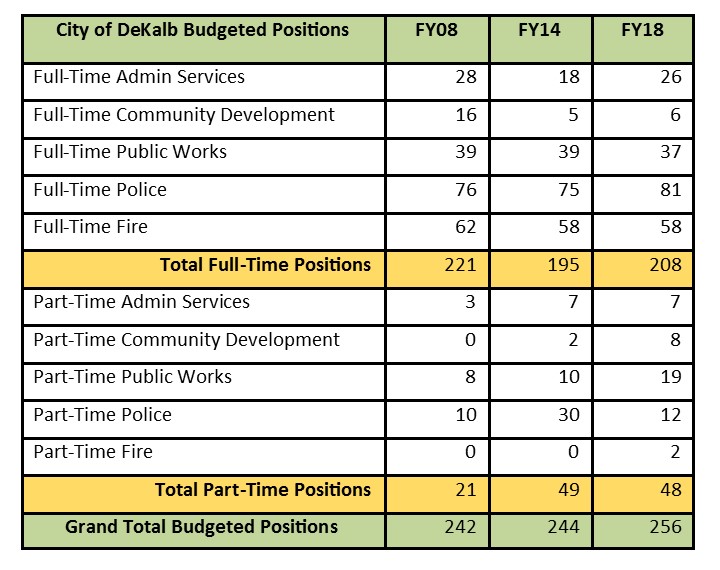 In contrast, population and enrollment are now down. Permits issued for new construction in FY16 numbered 22, and growth of revenues is likewise anemic. Since FY08 the four-person legal department was outsourced, inspectors outsourced (we used to have 9 inspectors and plan examiners), the economic development coordinator and engineer positions eliminated.

With all the stagnating and downsizing and outsourcing, why is there not more distance between the FY08 and FY18 numbers, especially as concerns admin services and full-timers? Our activity and revenue levels match FY14 much better. How do we get back there?

——————————-
Method:
The goal was to compare the numbers of full- and part-time positions budgeted in two past years with the fiscal 2018 budget draft that council is vetting now, using organizational charts and tables available in the budget documents themselves. These are the numbers of positions budgeted for, which are not the same as positions approved and filled. Data do not include numbers of elected positions. I chose the FY08 budget for three reasons: it covers part of the year referenced by the city manager, it is nearly identical to FY07 in terms of staffing plans, and it explicitly states that the city had 243 part- and full-time employees at the time (which, as you can see, is quite consistent with my counts). I chose the FY14 document as a semi-austere contrast to the city manager’s current budget draft.