***Updated 6pm: Check out the city attorney’s “blooper” during last evening’s meeting when he explained why he advised the mayor to adjourn the meeting before council could vote on the matter at hand. I’ve placed a video clip of it at the end of this post, or you could click here for the clip and to comment on Facebook. ***

DeKalb’s city council violated the Illinois Open Meetings Act (OMA) yesterday. It was a violation because the city scheduled a special meeting for Good Friday, which is a legal holiday in this state. Specifically, OMA says this:

You can easily find several state departments and offices where Good Friday is not observed, and obviously City of DeKalb doesn’t observe it. Doesn’t matter. If a statute establishes it as a holiday, it’s a legal holiday and you have to watch out for OMA.

And unlike meetings where you could goof up an OMA rule but then save your public body by not taking action (i.e., not actually voting on anything), the legal holiday rule says you can’t even hold the meeting without committing a violation.

I attended yesterday in order to congratulate the council on making a major change in management, to express my understanding of the huge undertaking in finding a new city manager, and to point out that the vacuum created by a city manager’s exit has led to major overspending in the past. END_OF_DOCUMENT_TOKEN_TO_BE_REPLACED

Likewise, I’ve become an expert in the travails of the general public, and the latest example involves council’s establishment of a state-mandated “TIF interested parties registry” for the proposed new downtown TIF district. The TIF Redevelopment Act only requires that the city adopt “reasonable registration rules,” which this crew took as an opportunity to create something decidedly unfriendlier than what came before. END_OF_DOCUMENT_TOKEN_TO_BE_REPLACED

***Updates 2/8: City says no double-billing was involved, so I’ve deleted statements below to the contrary. I do intend to look at 2017 billing cycle dates to confirm the bases for bills from previous months. That the error mostly affects customers on the south side has been confirmed. City remains silent on the plight of customers on fixed incomes, and the criticism of poor communication still stands.***

By now, you’ve received your utility bill (water, sewer, garbage) from City of DeKalb. Does it seem high? If so, chances are the culprit is your water bill. Here’s the explanation:

[O]ne of the mobile meter reading devices was not functioning correctly. The data from the reader did not load the route information to the computer and therefore, that December 2017 reading was not captured. The device was sent for repair and upon return of the device, the route was read again (mid- January 2018). This second read occurred approximately 20 days after the first reading. For this route, this translates to a larger utility bill that is due by February 21, 2018. The next bill, due April 21, 2018, will be smaller by the 20 days that were included on the previous billing. Finance staff at the front counter and answering phone calls will continue to provide this information to the residents.

I have requested more information about the area(s) affected, and what the city proposes to do to accommodate people who will have problems coming up with another $40 or $50 this month that they didn’t expect?

So far, the members of the City Barbs Facebook Group have figured out that DeKalb’s south side is involved in the screwup.

Why does the city even have a website and social media accounts? They do not know how to use them.

City of DeKalb seems to have a lot more trouble than usual lately with day-to-day operations. Let me count the ways.

1. I turned on my laptop at 5 pm last evening to watch Mayor Smith’s State of the City address, but the meeting was not streaming — some kind of technical issue. Later I found out this has been a problem since January 8.

2. Bright and early yesterday, I put in a request for accommodation of a disability during Wednesday’s special council meeting, because it’s not being held in council chambers (where the disability is already accommodated). Whenever I’ve made the request before — of anyone, anywhere — there’s never been a problem with getting what I need. But not only was there lag time in responding, today I opened up an email that says the city will be “investigating” my request. END_OF_DOCUMENT_TOKEN_TO_BE_REPLACED

Because the city’s finance advisory committee might likewise like to revisit EPI findings when it (the committee) reconvenes in 2018, I’d like to introduce EPI to our newer readers (and help refresh memories).

EPI stands for Executive Partners, Inc., which is the former name of an organization of financial consultants who, in 2009 and 2013, tried to help DeKalb think more strategically about its finances. 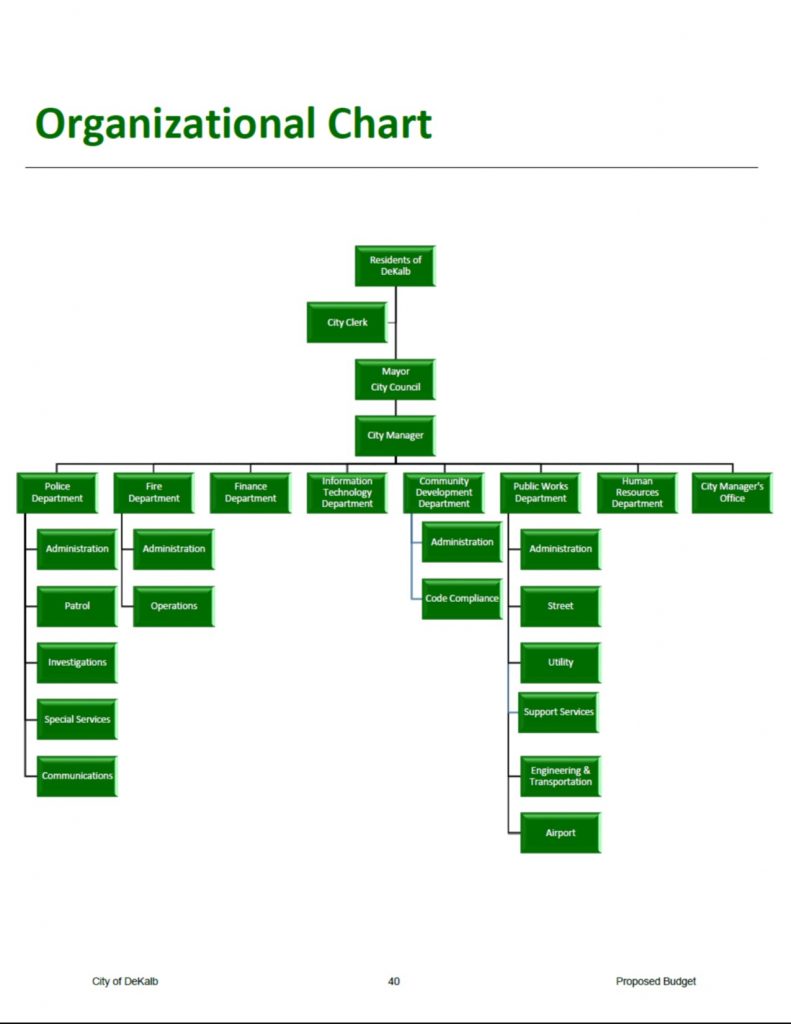 City council is expected to vote tonight on a resolution to “amend” city manager Anne Marie Gaura’s employment agreement, which currently expires at the end of this year.

My main concern with the vote itself is that it involves the removal of the expiration date from the contract, even though the DeKalb Municipal Code says the city manager “shall serve and hold office for a term of office specified by virtue of an employment agreement.” For this reason alone, I urge a “no” vote on the resolution.

But there are performance issues as well. Here are some of the major ones, in my opinion.

1. Failure to cooperate with, and render assistance to, elected officials. These are responsibilities required by the Municipal Code (3.08(b)). Yet Gaura deprived city clerk Liz Cliffe Peerboom of the basic tools of the job, including a desk and computer. She has also failed to comply with city council members’ requests for financial information, and brazenly ignored a residency requirement in recruiting an IT director.

2. Inability to produce a budget that covers the basics. Gaura has presented budgets that always include new hires to her inner circle at the expense of other needs. Our five-year outlook is so grim that finance advisory committee members have pledged to keep working on the fiscal 2018 budget into fiscal 2018, in order to try to make adjustments that will nudge the trajectory into more solvent territory. DeKalb has also struggled with deficiencies in internal accounting controls during Gaura’s tenure, according to the city’s auditors.

3. Damaged relations with residents, business people, and even another unit of local government. In a series of unforced errors, Gaura has had to walk back actions that took the community by surprise. The unlawful assembly and commercial inspection ordinances, for example, popped up on council agendas without previous community discussion and caused a great deal of dismay and distrust, not to mention the resources wasted in having to go back to the drawing board.

4. Inability or unwillingness to rein in staff. Gaura’s failure to set boundaries with her administrative team has allowed a range of unprofessional behavior, from the city attorney’s inappropriate participation in policy discussions, to the FOIA officer’s calling citizens liars with impunity. Staff do not even pretend at professional objectivity anymore, but rather have become a sales team for pet projects. They engage in hard-sell tactics and sometimes lie to get their way.

We can do better, DeKalb.

Feel free to join City Barbs on Facebook with your two cents.

Anne Marie Gaura’s employment agreement with City of DeKalb expires at the end of 2017. That is, it expires unless a resolution presented as a contract “amendment” gets passed by city council on Monday.

They’ve placed the item as a resolution to amend the employment agreement on Monday’s council meeting agenda. But it is not just an amendment to DeKalb’s contract with Anne Marie Gaura. It is a renewal, because the amendment removes the expiration date from the contract.

And removal of the expiration date clearly goes against Chapter 3 of the DeKalb Municipal Code, which says this:

If you believe the people of DeKalb deserve an up-or-down vote on a contract renewal that includes the legally mandated term of office, please share your views with council members.

When the city manager said “2007,” I didn’t know whether she meant fiscal or calendar 2007. FY07, which ended June 30, 2007, was a heady year. Out of more than 1,000 building permits,76 were for residential new construction and 27 for industrial/commercial new construction. Retail sales hit an all-time high. Population nearly reached 47,000 and everyone was sure we’d hit 50,000 by 2010. Enrollment at NIU briefly touched the 25,000 mark. END_OF_DOCUMENT_TOKEN_TO_BE_REPLACED

I watched the joint council-FAC meeting that the newspaper is referring to, and it did not look like there was much cutting of staff happening. With few exceptions, department heads talked about cutting expenses in a one-off manner. For example, they suggested simply not contributing the usual $12,000 to IHSA this year, and cutting non-critical training, and putting off purchases of equipment and software. In other words, the show was pretty much the same juggling act they do every year. END_OF_DOCUMENT_TOKEN_TO_BE_REPLACED