Last night, City of DeKalb held a public hearing and approved an annual budget for the Community Development Block Grant (CDBG). CDBD is a federal program administered by HUD that helps ensure viable communities, particularly in the area of decent and affordable housing for low- to moderate-income residents.

The general public did not participate in the public hearing. We rarely do. The CDBG budget is treated as routine and unremarkable, even when it’s not.

And this year it’s definitely not. END_OF_DOCUMENT_TOKEN_TO_BE_REPLACED

The alderman from the Fifth Ward, Kate Noreiko, was pushing to build a new DeKalb Municipal Building instead of renovating the one we have. She says she thinks it’s unsafe, though she provided no foundation for this belief.

Part of Noreiko’s argument was that, if the pipes there freeze and burst, what would city workers do?

Hold that thought for a moment. I want to introduce another goal council members talked about evening, which was emergency operations planning. During that discussion, Noreiko wanted to address active shooter situations.

My mind went back to frozen pipes, because we don’t have SWAT teams for that.

Last month, 30,000 Com Ed customers in Kane, Will, and Kendall counties lost power during one of the days of extreme cold we had. Fortunately, the outage lasted only two hours. END_OF_DOCUMENT_TOKEN_TO_BE_REPLACED

Because the city’s finance advisory committee might likewise like to revisit EPI findings when it (the committee) reconvenes in 2018, I’d like to introduce EPI to our newer readers (and help refresh memories).

EPI stands for Executive Partners, Inc., which is the former name of an organization of financial consultants who, in 2009 and 2013, tried to help DeKalb think more strategically about its finances.

Does a drive around DeKalb feel like you’re continually crossing rough train tracks even where there aren’t any? Guess why. 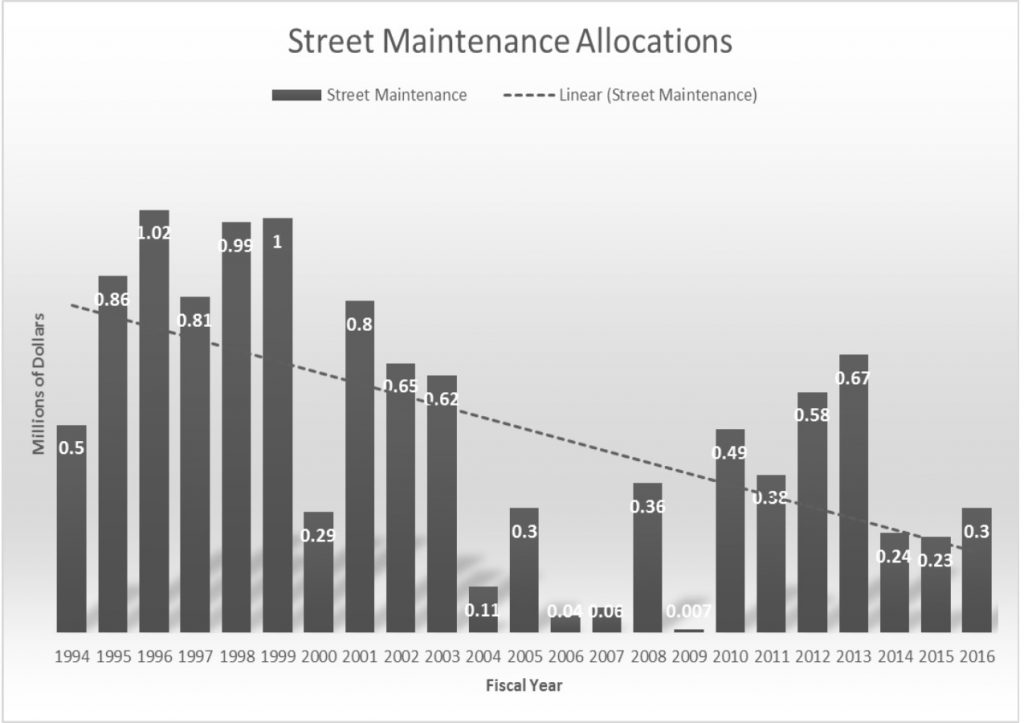 The above are actual expenditures for street maintenance. Shown are total expenditures from two primary sources for maintenance, the motor fuel tax (MFT) revenues that are shared with us by the state on a per capita basis, and local (aka “home rule”) fuel taxes.

From the chart above, it looks like MFT revenues are failing — as if we’re in recession again now. While these revenues are somewhat stagnant, the much larger problem is that the city has gotten into the habit of spending these funds on other stuff.

It’s legal, but obviously a terrible idea. City council needs to fix it before it considers a current proposal to hike the local MFT by two cents. END_OF_DOCUMENT_TOKEN_TO_BE_REPLACED

Mulling over our current the lack of funding of capital projects and fleet needs, I ended up deciding to contrast the spending from three different time periods, as expressed by transfers (or in the case of 2018, expected transfers) out of the General Fund into the Capital Projects and Fleet funds. I’ve also placed rough estimates of average numbers of employees using full-time equivalents (FTEs).

Clearly, we’ve been here before — riding the edge of the cliff, I mean.

Several of DeKalb’s city council members balked at making financial or other commitments to the STEAM center project until they have in hand a thorough analysis of its most important source of funding, the soon-to-be-retired Tax Increment Financing (TIF) districts.

Even the most worthy projects are subject to resource limitations, so a peek into the municipal wallet and thoughtful prioritization make good sense, and are probably the most important reasons to apply the brakes.

But there are other reasons, too. Here are three of them.

1. It’s not our job. It’s not automatically the duty of the city to pick up the slack on an NIU project, especially one that NIU itself has decided it can’t spare a dime for. Public safety and infrastructure are supposed to be the names of our games, but now the consultant and administrators are broaching consideration of involvement in site selection, governance, even operations. Boundaries, people.

2. The push is premature. This is a top-down pet project headed by city administrators who have clearly done most of the work, and last week’s special meeting was clearly about hard-selling our new electeds into supporting it. But there is no sign of any corresponding surge in public support. No organization has stepped up to pledge financial support for its construction and operation. It’s an entirely backwards process, which bodes ill for fundraising efforts. If STEAM gets approved at this point, we will all get stuck with the bill.

3. The TIF goal is unclear. As proposed, the project tells us little about ROI, which in a TIF district means raising EAV in the district. In fact, at least initially it would do the opposite, by taking another large property off the tax rolls.

I want to note that counil members David Jacobson and Michael Verbic have asked for financial analyses before (Verbic as a Financial Advisory Committee member), and they’ve been completely ignored in the past. The unified insistence on the TIF analysis is a welcome move, and I hope it means this council aims to reclaim its full authority in stewardship. Fingers crossed.

The Chronicle has published a letter to the editor that caught my eye. It’s about local candidates and their positions on the issues.

The words that they use may change, but the rhetoric is the same.

The writer goes on to list the same old, same old: DeKalb-NIU relations, easing of the tax burden, and jobs/business climate. He wants to hear specific ideas.

While I largely agree that some city candidates are hard to pin down, I believe the real issues in DeKalb are more fundamental, and require remediation before we can progress.

Here’s an example from Sunday. I attended the DARA forum for DeKalb mayoral candidates. One of the candidates took the position, in what struck me as a somewhat scolding tone, that residents should not share grievances unless they have the solutions already worked out. Apparently this person has already adopted city hall culture where citizens are separated into friends who have their attention, and whiners who don’t. END_OF_DOCUMENT_TOKEN_TO_BE_REPLACED

The following is a production of StrongTowns.org.

Note: Strong Towns is not responsible for any mental duress resulting from repeated watching of this video. We are also not responsible for angry reactions from planners and engineers confronted with the illogic of their world view. If watching as part of a group, we recommend having a padded room or some type of physical restraint system available to keep those that develop a temporary feeling of hopelessness from doing damage to themselves or others.

As DeKalb tries to figure out how to come up with $6 million a year more to repair our neglected streets without chasing out more of our population, there are ways to put together better answers. For our city, it means a major shift away from its Edifice Complex (public spending on buildings that don’t contribute to the tax base) and development of a grownup’s appreciation for basic infrastructure.