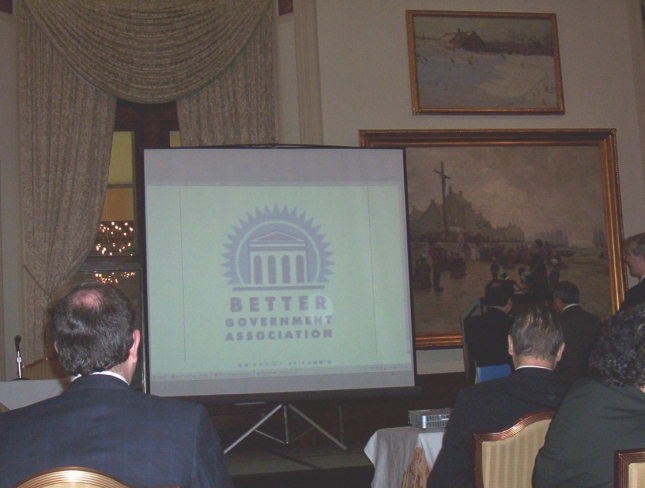 Attorney General Lisa Madigan gave an overview of the Freedom of Information Act (FOIA) and proposed changes at a breakfast by the Better Government Association.

The room in the Union League of Chicago was a little dark, perhaps because bright lights would not be friendly to the artwork on the walls. None of my pictures came out very well; I meant this picture to be a test with the lighting. The proposed changes appear in SB 189 and await the signature of Governor Pat Quinn. See the bottom of this article for how to find the text of the bill: http://www.daily-chronicle.com/articles/2009/06/05/16359524/

This is my summary of the handout “Key Components of Transparency Legislation Senate Bill 189” provided by the Office of the Illinois Attorney General on what the bill proposes:

Give the Attorney General’s Office the authority to assign fines for non-compliance
Create a process for FOIA requests, $2,500 to $5,000
Create an environment with the presumption of transparency
Requires that a response be given within five business days instead of seven
Establishes a Public Access Counselor in the Attorney General’s office to determine if documents should be released under FOIA or denied
The Public Access Counselor would also assist in determining if a public body violated the Open Meetings Act
Makes exemptions to FOIA more clear
Limits the charge on copy costs to the first 50 pages free and $.15 per page thereafter
If a citizen sues to get FOIA access, and wins, attorney fees will be reimbursed
Requires annual FOIA and Open Meetings Act training

A panel of speakers discussed the merits of the bill and any flaws. Cara Smith, Policy Director in the Illinois Attorney General’s Office, quoted in the “Daily Chronicle” article was a panelist. According to a couple of the panelists, as it passed through the Senate and House, legislators made modifications and it is a little more weak than originally proposed. Legislators stripped a criminal penalty for non-compliance out of the bill. On the bill, when asked, AG Madigan thought Gov. Quinn should sign it and said, “Legislation is very rarely perfect.” The panel also discussed how the proposed bill could affect those villages and small public bodies if passed into law. The current FOIA does not include enforcement so if a citizen requests information and the public body denies it, there are not too many options for that citizen at all.

Jay Stewart, formerly the Executive Director of the Better Government Association and now the Senior Counsel, Illinois Governor’s Office, suggested that it might be easier for officials to create a record rather than copy multiple records, whatever is faster.